What is a Pharmacy Benefit Manager (PBM)?

PBMs are fairly equal in the basic services they provide. They work with self-insured companies and government programs striving to maintain or reduce the pharmacy expenditures of the plan while concurrently trying to improve health care outcomes.

Are PBMs and Payers Aligned?

“Relatively few employers believe the goals of their PBMs strongly align with their own goals for managing employee health, productivity and costs.”

All PBMs are Not Created Equal

The Foundation of PBMs

No Disclosure of Revenue Streams

No Limit to Revenue Streams

Partial Pass-Through of Rebates and Pharmacy Pricing to Client

100% Pass-Through of Rebates and Pharmacy Pricing to Client

Traditional PBMs retain a network spread, rebates, and other revenues streams as compensation.

When Comparing the Traditional PBM model vs. Pass-Through PBM model

1. PBMs do not include all-brand National Drug Code (NDC) for rebate aggregation, resulting in the PBM retaining the NDC rebate rather than the client.

2. PBMs do not pay on Over the Counter (OTC) rebates, although they collect and retain the rebates.

3. PBMs do not pay on insulin rebates, although they collect and retain the rebates.

5. PBMs do not pay on all diabetes supplies, although they collect and retain stated cost.

7. PBMs may charge an administrative fee on reversed claims.

8. PBMs adjust the number of drugs available for the guaranteed per prescription rebate by changing the denominator of drugs rebated.

9. PBMs only provide a portion of a point of sale rebates.

11. Direct and Indirect Remuneration (DIR) Fees, also known as a Clawbacks, are revenues collected from the pharmacy 90-days after a paid claim. DIR Fees are 100% retained by the PBM.

13. PBMs are responsible for manipulation of the Most Favored Nation (MFN) pricing.

15. PBMs do not pass-through Usual and Customary (U&C) claims.

19. PBMs negotiate a lower rebate but request a lower acquisition cost for the drug at the in-house pharmacy of the PBM.

20. PBMs negotiate a higher rebate by allowing slimmer early refill rules that increase the chance for an additional fill per year.

21. PBMs dispense 90-day supplies but charge the client for a 100-day supply.

23. PBMs reclassify generic drugs as a brand drugs, resulting in the PBM paying the pharmacy the generic cost and charging the client the brand cost.

24. PBMs switch the NDC, resulting in the PBM paying the pharmacy the lower cost NDC and charging the client the more expensive NDC.

25. Zero Balance Due: Force shift 100% of patient pay into the contractual guaranteed agreement.

30. OTC claims NOT covered as part of the plan benefit

AWPs have little relevance in projecting final client costs from PBM to PBM. Therefore, the intent of any employer should be to procure medications at the lowest cost per pill.

What will you pay your PBM
for brand and generic drugs? 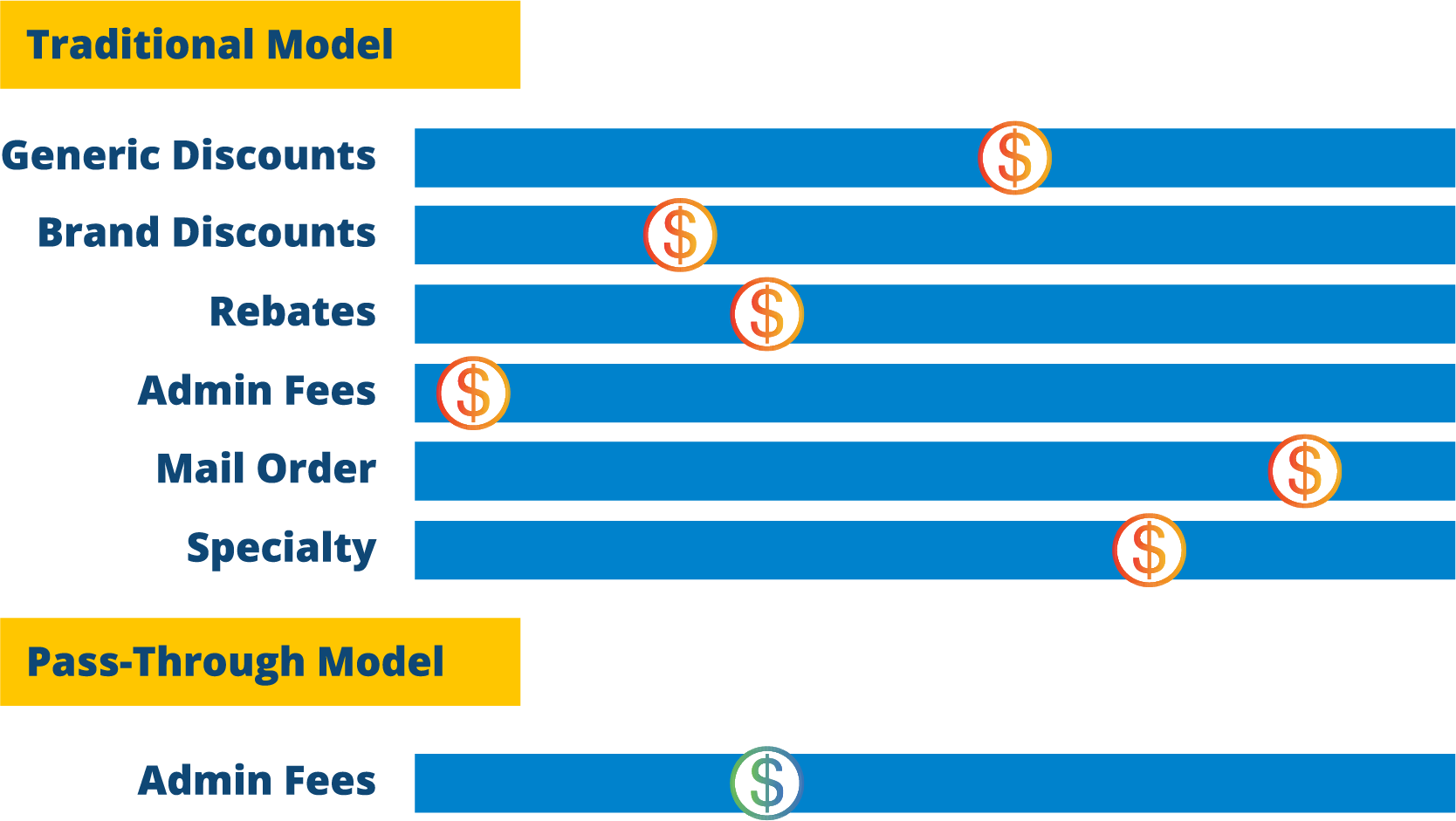 In this example, a traditional PBM moved 2000 claims that processed at AWP-77% into the brand category that has a guarantee of AWP-17%. This falsely gives the client the impression of a successful and competitive contract. Optics are areas within a PBM contract which allow the PBM to create a margin by using angles on contractual words.

In the PBM Optics Generic/Brand chart above, AWP-77% was applied to 2000 extra “Generic” claims which gives the “illusion” of better discounts (AWP-22.5%).

Your PBM is earning revenues if they are, in fact, the ultimate decision maker regarding:

What Drugs Your Members Take

Where the Drugs Come From

How Much They Cost

What if your PBM contractually warrants that their sole source of revenue is the administration fee?

No surprises or hidden tactics. (Yes, such a PBM exists).

Southern Scripts offers a value-added approach to ensure the employer absolute freedom, control, and choice to their health plan structure without compromising patient experiences and outcomes.

Live, 24/7 Customer Service
Dedicated representatives are available around the clock

Southern Scripts is approved by Pharmacists United for Truth and Transparency, a non-profit advocacy organization founded by independent pharmacists and pharmacy owners devoted to exposing the truth about the anti-competitive tactics of pharmacy benefit managers.

“Southern Scripts has been a bright spot in our journey to redefine how healthcare is delivered.”

“Southern Scripts is a completely different PBM – fully transparent and very fair to pharmacies. They are saving plan sponsors millions of dollars, many of which are local municipalities in Louisiana and across the country.”

“The savings are very real and significant. We have had excellent service and support from Southern Scripts. We have been with Southern Scripts for 18 months and realized our savings in our pharmacy spend was even more than they estimated.”

“It is an understatement to proclaim that Southern Scripts is a saving grace. I can honestly say that they are the one vendor I can count on to run seamlessly, without my intervention, and also engage me and my team periodically with plan insights and options for potential savings strategies.”

“There is a great need to move to a Fully Transparent and Pass-Through PBM model and Southern Scripts is my preference. I strongly advise if you are bidding Rx you request a direct quote from Southern Scripts.”